Osteoporosis Prevention AND Reversal with “The Forgotten Mineral”

Strontium, a naturally occurring mineral in the same mineral family as calcium and magnesium, has been shown to promote bone growth in both human and animal studies. Strontium occurs in nature in soil, foods, and bones.

Before you get nervous, let’s clarify something: this is NOT the radioactive “strontium 90” that many of us were forced to hide from under our desks in the 1950s during “A-bomb drills.” The strontium I’m talking about is an all-natural, non-radioactive mineral that is quite safe.

Strontium has been studied since the early 1900’s for its effect on bone density. Strontium and calcium have been shown to be superior to calcium alone for rebuilding bone.

Another study in 1979, performed on a group of patients with metastatic bone cancer (cancer that has spread to bone), showed an improvement in bone density and decreased bone pain in the strontium-treated group.

In 1985, another study found that “Following strontium therapy, all [measurements] of bone formation increased, while bone resorption remained unchanged.” Sixteen years later, a research group reviewed the studies on strontium and concluded that “In addition to its anti-resorptive activity, strontium was found to have anabolic (tissue-building) activity in bone.”

Naturally, the most recent strontium-osteoporosis research has been performed by a drug company using a patentable strontium combination. (Remember, strontium by itself isn’t patentable because it is a naturally-occurring substance). But combined with a synthetic substance called ranelic acid, strontium becomes a patentable drug. This “drug” is available in Europe as the trademarked Protos®, but all studies before this suggest that it is the strontium itself which is responsible for bone-building effects.

In a three-year, randomized, double-blind, placebo controlled study using 680 milligrams of strontium daily, women suffering from osteoporosis had a 41 percent reduction vertebral fractures compared with placebo. The overall vertebrae density in the strontium group increased by 11.4 percent compared to a 1.3 percent decrease in the placebo group.

In another recent study, 353 women who had already experienced at least one osteoporosis-related vertebral fracture took varying levels of strontium ranelate or a placebo. In the group who tool 680 milligrams of strontium daily, there was a 3% increase in lumbar bone mineral density per year, significantly greater than placebo. At the end of the second year of the study, there was a significant decrease in fractures in the strontium group compared to placebo.

In a 2002 randomized, double-blind, placebo-controlled trial, 160 post-menopausal females who did not have osteoporosis were asked to take placebo or varying amounts of strontium daily. Compared to the placebo group, women who took 340 milligrams strontium a day had a significant increase in bone mineral density in two years’ time. All groups also took 500 milligrams of calcium daily, but no hormones or vitamin D.

It appears that not only can strontium prevent osteoporosis, it can repair existing damage. And it doesn’t seem to matter what form it is in: strontium ranelate (a patented drug in Europe), strontium citrate, strontium gluconate, strontium lactate, or strontium carbonate. It’s the mineral strontium itself that works the magic on bone!

If you want to be on the safe side concerning osteoporosis prevention, consider taking one dose of strontium (200-400mg) per day. For those without osteoporosis but with known risk factors (family history, immobility, smoking, etc.) one capsule twice daily is prudent. Also be sure to take the recommended calcium (1,200-1,500 milligrams for post-menopausal females) plus associated bone nutrients including magnesium, zinc, boron and vitamin D.

NOTE: Maxi Multi does not contain strontium. If you see a “bone formula” with strontium, don’t take it. Strontium should be taken away from calcium and magnesium for best absorption.

Be the first to review “Strontium” Cancel reply

The Ten Most Dangerous Foods: Part I There are some foods that are unhealthy for various reasons, and then there are foods that are SO unhealthy that they shouldn’t even be considered edible. Here are some of the major criteria I used in accessing the most dangerous foods: 1.) Omega Ratios (ratio of “Omega-6” to […] 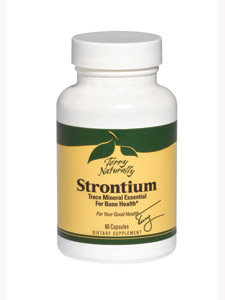