CoQ10 is a naturally-occurring antioxidant produced in the human body. It is vitally involved in energy production. CoQ10 functions as an “energizer” to mitochondria, the body’s energy producing units. Mitochondria, which produce energy the body’s “energy currency,” ATP, require CoQ10 to “spark” their production of energy units (ATP). Muscles, and the heart in particular, have high requirements for CoQ10.

CoQ10 is a potent antioxidant beneficial for:

CoQ10 is produced by the body, but age, nutrient deficiencies, disease and some medications can lower the body’s CoQ10 levels. Cholesterol-lowering drugs (statins) deplete CoQ10. (15,54,74-77)

Studies have shown that the oil-preserved form is up to 3 times better absorbed than other forms. (78-80)

Although many claims are currently made for a “new” form (ubiquinol) being “more absorbable” than ubiquinone, this has never been proven or well-studied. Learn more about this issue here: Ubiquinone (CoQ10) versus Ubiquinol: Which Is Better?

CoQ10 and it’s use in CHF (Congestive Heart Failure):

http://www.ncbi.nlm.nih.gov/pubmed/19966871
“… Coenzyme Q10 (CoQ10) is essential for electron transport within the mitochondria and hence for ATP generation and cellular energy production. We recently demonstrated that plasma levels of CoQ10 are an independent predictor of survival in a cohort of 236 patients with chronic heart failure (CHF) followed for a median of 2.69 years. This is consistent with previous studies which have shown myocardial CoQ10 depletion in CHF, and correlated with the severity of the underlying disorder. Several intervention studies have been undertaken with CoQ10 in CHF, including randomized controlled trials with mostly positive outcomes in relation to improvement in plasma levels of CoQ10. A meta-analysis showed that CoQ10 resulted in an improvement in ejection fraction of 3.7% (95%CI 1.59-5.77) and the mean increase in cardiac output was 0.28 L/minute (95%CI 0.03-0.53). In a subgroup analysis, studies with patients not taking ACE inhibitors found a 6.7% increase in ejection fraction. The ongoing Q-SYMBIO trial will address whether CoQ10 supplementation improves survival in CHF patients. CoQ10 depletion may also be a contributory factor for why statin intervention has not improved outcomes in CHF. There is an emerging evidence base in support of CoQ10 as an adjunctive therapy in CHF.”

http://faculty.washington.edu/ely/coenzq10.html
“…The majority of the clinical studies concerned the treatment of heart disease and were remarkably consistent in their conclusions: that treatment with CoQ10 significantly improved heart muscle function while producing no adverse effects or drug interactions. …”

50-100 mg per day for health maintenance and anti-aging / longevity programs.

200 to 400 mg per day for heart problems, cancer, weight loss programs and other indications.

Studies performed by the National Institutes of Health (NIH) using Vitaline ™ brand CoQ10, have used 300-400 mg (or more under medical direction) per day. 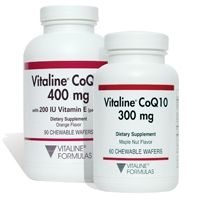 Vitaline brand CoQ10 is THE CoQ10 that has been the subject of NIH studies and a recent trial showing its potential value in Parkinson’s patients.

Co10 has been shown to be potentially helpful for:

THESE ARE ALL THE EXACT SAME PRODUCT That Is Used In The NIH Studies
All are made by Vitaline and given different labels.

Some people (including some doctors) have a mistaken fear of Vitamin E, believing that “too much is dangerous.”

We have been unable to find any evidence in medical or scientific literature of any danger from taking large doses of Vitamin E. The National Institutes for Health (NIH) a US government authority places the maximum daily intake of Vitamin E at 1500 IU for healthy adults.

High intake of Vitamin E intake does tend to “thin” the blood, affecting coagulation by inhibiting platelet aggregation. People using antigoagulants or who bleed too easily may wish to discuss the use of Vitamin E with theri doctor.It has also been reported that Vitamin E in high doses may block the action of Vitamin K which is known as “the clotting factor.”

According to the label information and the Enzymatic Therapy website:

Cholesterol Questions Dr. Myatt and Nurse Mark field a lot of questions from Wellness Club Members – and some of the most frequent concern cholesterol. They have asked me to devote this newsletter to answering some of those questions. Cholesterol seems to be a subject on everybody’s lips recently, with medical scientists recommending even lower […]

The 5 Most Important Supplements For Health and Longevity Many nutritional supplements and herbs have documented value in maintaining health and possibly also extending lifespan. The following list of recommendations comprises my picks for the 5 most important supplements the average person should take to preserve or reclaim optimum health and vitality. I have chosen […]